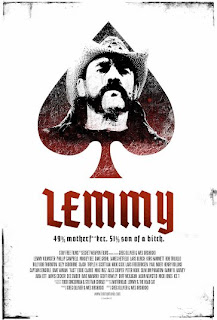 Quote “You can´t have it all, Where should you put it?”
No sane person on this planet can argue against the importance of Lemmy Kilmister, singer, bass player and front man in the now classic band Motörhead. And people agree on that  in the documentary Lemmy from 2010. It is pretty much a standard kind of documentary, with the exception that no one seems to have a bad word to say about him. Hardly his old band mates in the space rock/prog rock band, Hawkwind, which he was fired from in disagreement in the early 1970ies. Quite opposite, the punkrock and hardrock novelties lined up to cheer Lemmy. Something that don´t seems like go to the dear Lemmy´s head. The docu portray a down to earth easy going old man that still manage to play and sing the most hard and loud music this planet knows about. Most people in the docu agree on without him most trash and death and whatever metal wouldn´t sound the same. I can say that defiantly wouldn’t the Crust/D- beat punk genre sound the same.

Besides to show how important he is, we will follow his daily life in the tour bus and at home. We got to see his compulsive gambling, drinking and collecting of WW 2 German  knives and bayonets. As well as we get to know his opinion on family life and life in general. And there are few subjects that he always comes back to. The celebration of Beatles and Little Richard and that he love his son the most.

To some he might seem to be a complicated character mixing both the obsession of the black, gay 50´ies rock `n` roller Little Richard and decorating his home with Nazi flags. But to me he isn´t. To me he seems like to be totally honest towards himself about his likings. High and low doesn´t matter as long he gets interested in it. Not giving a shit about what people will think of him. The man that seems to be friendly to everyone feels that he have to defend himself against accusations of being a Nazi. Of course no one believes that he is one of those bad guys. But it is good to hear it from himself.

Its hard to think his age is 63 in the documentary, but sometimes the film maker manage to catch his face with a dead tired look in his eyes, then he looks like he is a thousand years old. Then I really wanna know what he was thinking. But in there we won´t get. That last door is closed. The man that always writes an autograph, let people take his picture, share a bottle or three with fellow musicians and knows everybody won´t let us in into his most secret chambers. If so this documentary would be one of its kind. Now its an OK docu, well worth to get into your collection besides all the other rocumetarys. It´s no really criticism against the film makers because it must been a hard task get anything interesting out of the one interviewed because their child like admiration of him. However will I point out that sometimes the movie is a bit confused in its narration.

Unlike docus on Ramones, Sex Pistols or Black Sabbath that always leaves a sour taste in your mouth after seeing them. Lemmy Kilmister is a rock n roller that you don´t get disappointed in, a grand dad of both Punk and Metal that still is King.